As a wanderer who is often far from home when I feel the urge, I’ve been pondering what effect the forthcoming round of public sector cuts will have on public toilets.

Councils in the UK have no statutory obligation to provide public conveniences, which is probably why the good old loo is always in the front-line when it comes to cutbacks.

Admitting this makes me sound really sad, but last night I waded through Newport council’s ‘2014/15 Budget & Medium Term Financial Plan‘ to try to determine the future for (or lack of) Caerleon Tourist Information Centre (where Harri works part-time).

This is the sort of ‘plan’ that every council in Wales is having to make to address future shortfalls in funding. The whole document (and I promise I didn’t read the full 191 pages, just the specific proposals for tourism/leisure cutbacks) makes for pretty depressing reading but the one thing that really jumped out at me was the ‘Rationalisation of public toilet provision across the City‘ (p32). In a sentence that only a public sector official could compose, it explains,’the public toilets provided by the Council are to be reprovided through existing alternative facilities’. An additional column explains further that it’s the ‘standalone toilets’ that are likely to close, with four jobs affected

Unfortunately, Newport council isn’t alone in deducing that closing toilets is an easy way to balance the books. Across Wales, public toilets are disappearing at an alarming rate, to the dismay of those who are trying to attract visitors and overseas tourists to our beautiful landscapes. Harri and I travel all over the place and too often there’s not a toilet to be seen for mile upon mile; those that do exist often lack toilet paper and/or hot running water (though we’d prefer that to nothing).

In Powys, a plan to hand over 32 public toilets to town and community councils has been delayed for until April 2015. What Powys council is calling ‘the toilet transfer initiative’ will apparently save £980,000 a year!! When did having a widdle become so expensive?

You’d have thought Pembrokeshire’s public toilets would be safe, the county being one of the most visited in Wales, but no. Last September, the local council announced its plans to close seven toilet blocks. As they currently have 93, this doesn’t sound too bad at first but you’ll probably feel differently when you’re taken short in Pembroke or nearby Pembroke Dock, where toilets at The Parade and Black Horse (Pembroke) and Front Street and  Hobbs Point.(Pembroke Dock) are earmarked for closure.

In what sounded like a bizarre bit of water closet boasting, Pembrokeshire was reported on BBC Wales as claiming it had the highest number of toilets per head in Wales and and ‘probably the UK’. Like others across Wales, the unitary authority hopes that private businesses or community councils will step in to fill the gap.

I’m not holding my breath but it certainly would seem that councils no longer see public toilets as something they are a moral obligation to provide. Who cares if little Johnny wets himself or an elderly person taking water tablets would rather stay at home than risk an embarrassing accident?

In 2011, public toilets at Llansteffan and throughout the county were threatened when Carmarthenshire council decided it would no longer take financial responsibility for public toilets. Community councils argued then that toilets were essential to visitors and they were absolutely right.

In August 2012, I emailed local councillors about the dire state of the toilet facilities in Caerleon. These are the ones adjacent to the Roman amphitheatre and the first toilets that any visitor to the town is likely to use. There are just three cubicles: one for men, one for women and a disabled toilet for which a Radar key is required.

In my email, I described the filthy condition of the men’s cubicle; it was flooded, stank and looked like it hadn’t been cleaned for days. The women’s toilet was not as bad but lacked toilet paper.

I pointed out how the great efforts made to showcase Newport and the surrounding area during the Ryder Cup in 2010 seemed to have fallen by the wayside. ‘What a terrible first impression for anyone,’ I wrote. To be fair, I got an immediate response from one local councillor, which was quickly followed by the official management response.

The problem, as always, came down to funding. The toilets were being opened on a Sunday as a trial (presumably in recognition of the fact that the urge to wee doesn’t stop on the Sabbath) but not being cleaned. There was not, it transpired, ‘financial availability to fund additional cleaning’.

I’m pleased to report the Caerleon toilets remain open on a Sunday so, cleanliness aside, the trial clearly demonstrated a real need for public provision at this popular visitor attraction.

I just hope the strategically-placed toilets at Erwood on the A470 never get axed or we’ll never again be making the long, leg-crossing journey from south to north Wales.

It seems that public toilets are going the way of housing… and food. Needs that Maslow viewed as absolutely basic back in 1943, the bottom-line stuff that had to be met before an individual could function properly as a human being, are now being re-categorised as  ‘nice-to-haves’. Hungry? Try to ignore the rumblings in your stomach. No home? There’s plenty of room under a park bench. Full bladder? Cross your legs and just hope something’s open twenty miles up the road.

Excretion – once deemed a basic physiological need – has become something our society can’t afford for us to do away from the home. And when we live in a society where the Government doesn’t care a toss that demand for food banks is growing every day and decent, affordable housing has already become a luxury for millions, then what hope is there for the humble public convenience? 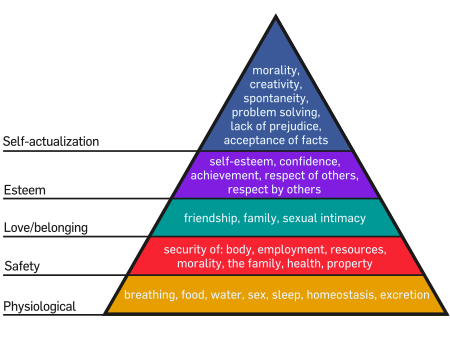 In the Guardian newspaper’s online Comment is Free, Emma Brockes writes how, in Manhattan, the need for a wee (or number two) has been seized upon as a way of making big bucks. A private enterprise called Posh Stow and Go appeals to those whose bank accounts enable them to avoid the nasty, unhygienic public toilets that still exist. It works on a membership model and membership is strictly limited to those who can afford it.

It’s not even as shocking as it should be…  expect the idea to arrive in British cities one day soon, though I doubt there is a sufficient customer base for it to proliferate here in Wales. No luxury loo stop in Erwood then.

The £4 million ‘Have You Packed For Wales? campaign acknowledges the billions of pounds tourists contribute to the Welsh economy, but it seems no-one is worrying about where they’ll be spending a penny.

This website uses cookies to improve your experience while you navigate through the website. Out of these, the cookies that are categorized as necessary are stored on your browser as they are essential for the working of basic functionalities of the website. We also use third-party cookies that help us analyze and understand how you use this website. These cookies will be stored in your browser only with your consent. You also have the option to opt-out of these cookies. But opting out of some of these cookies may affect your browsing experience.
Necessary Always Enabled
Necessary cookies are absolutely essential for the website to function properly. This category only includes cookies that ensures basic functionalities and security features of the website. These cookies do not store any personal information.
Non-necessary
Any cookies that may not be particularly necessary for the website to function and is used specifically to collect user personal data via analytics, ads, other embedded contents are termed as non-necessary cookies. It is mandatory to procure user consent prior to running these cookies on your website.
SAVE & ACCEPT
0 shares